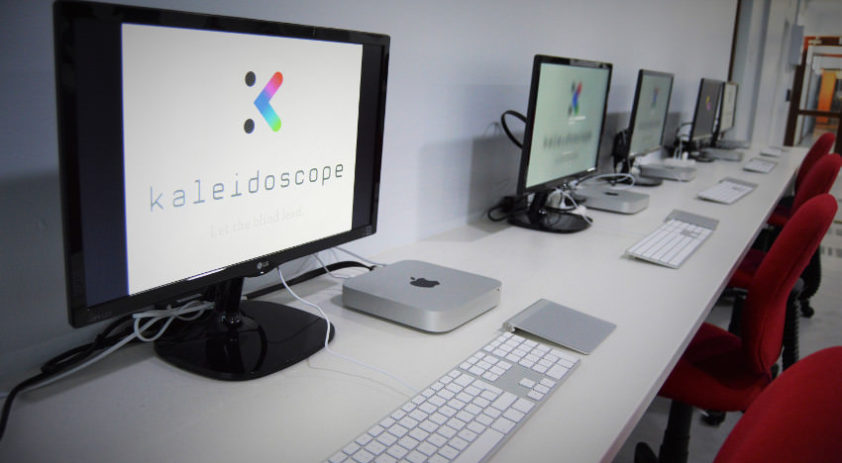 Apple devices can calibrate someone’s hands so they can type in Braille on their touch screens. And more than 350 000 sighted people are volunteers on the iOS app Be My Eyes. When a blind person needs help to “see” something, a volunteer can assist them through live video chat.

This kind of connectedness and functionality is what planted an idea in Hein Wagner’s head – for a training centre where people with visual impairments can be trained on cutting edge information technology.

A good deal of planning, negotiation, financing and hard work later, that training centre has become a reality.

Kaleidoscope’s Apple technology centre for the blind was launched in June, and will help prepare the visually impaired, especially people who lost their sight later in life, for the open labour market.

Why is the centre important?

Currently, 97% of persons who are visually impaired are unemployed. “There is an enormous need among blind and partially sighted people in South Africa to be trained in affordable accessible modern technology to enhance their employability,” says Freddie Botha, Executive Head of Kaleidoscope.

“It is very important to empower our blind and partially sighted persons to enter the open labour market on the same level as sighted applicants and employees.”

Hein Wagner, Kaleidoscope’s brand ambassador, motivational speaker and global adventurer, says with the appropriate training, support and guidance, the considerable obstacles in blind people’s way are quite possible to overcome.

The huge cost of importing adaptive technology to make computers accessible for the blind was another motivating factor. “Up until a few months ago it would cost you more than R10 000 to convert a standard PC into an accessible text to speech computer for the blind,” he explains. “An average Braille display would put you back just short of R80 000. With 97% of the blind in SA unemployed, it is time to find an alternative way to equip the visually impaired with affordable tools and training that will help them to enter the job market and become economically active.”

Apple has it all

“Since I moved over to the Apple product range three years ago I’ve never looked back” says Wagner. “All Apple’s equipment is fully accessible to the visually impaired, straight from the box. Whether I’m tweeting, sending a WhatsApp, checking in on Facebook, reading my daily news, tracking my fitness, answering my e-mails, browsing the web or working through a complicated spread sheet, I am using an Apple.”

Wagner says that the training will focus on using the technology for personal and business use and the aim is to train at least 400 students in the first year of operation. “It is our duty to train the visually impaired on the most recent accessible touch screen, laptop and desktop computers, to make them more employable once they leave our facility.”

All the training modules will begin with the basics of Voiceover – the Apple accessibility tool for the blind. Students will also be trained on both iOS and the latest Apple Mac operating system.

“Our trainer, Philip Crouse, is also blind as we believe that a trainer who is blind himself will use the most ideal method to transfer his knowledge and skill to the students in such a high tech facility,” says Wagner.

Students will also receive training on the latest software they will most likely face in the corporate environment once employed.

Wagner says that Kaleidoscope will also engage with the corporate sector to ensure the placement of persons with visual impairments and support the employee as well as the employer to ensure effective work and training placement.