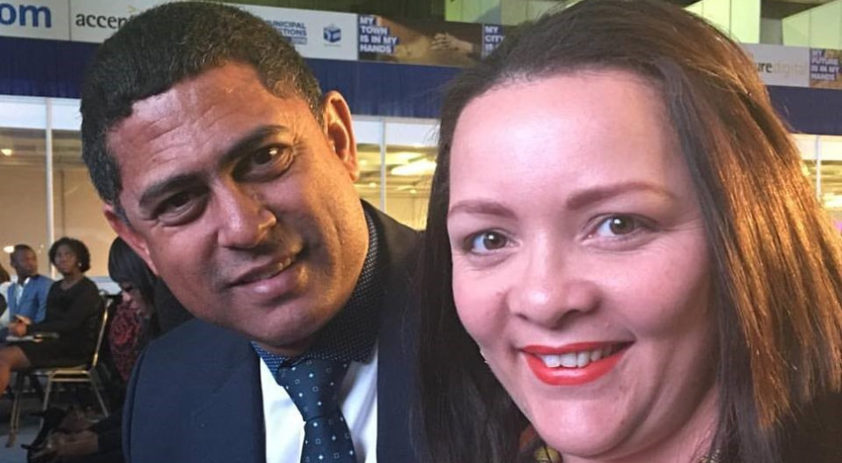 What does it feel like to work in the Electoral Commission’s results centre in Pretoria while frantically trying to finalise results? And what on earth do you DO if you’re working for the IEC but it’s not an election year?

Granville and Priscilla Abrahams, well-known former Worcester residents now living in Centurion, let us in on the difficulties and joys of pulling off elections for a living.

What’s your job description at the IEC?

Priscilla is responsible for voter education, outreach and training in the Tshwane regional office. Granville is senior manager of electoral operations in the IEC’s national office.

Priscilla needs little introduction in Worcester. She was born here, raised here, started out her school career at Victoria Park Primary and matriculated from Worcester Senior Secondary. She started working for the IEC just over 15 years ago (as regional supervisor in the Cape Winelands district, based in Worcester) before moving to Gauteng in February 2012.

Granville was born in Woodstock and raised in Manenberg and Mitchell’s Plain. He was the IEC’s first appointment in the Western Cape – back in 1998 – as provincial manager. He was also only the 32nd appointment nationally and is currently one of only 20 people with such a long employment history at the IEC. He moved to Centurion a few months ahead of his wife – in June 2011.

Tell us about the frantic election period

Election preparation starts as soon as the books are closed on the previous election. From about two months before the election, your days only end when the work is done. “In my case it is to make sure all personnel are trained for election day and that staff recruitment is solidly in place,” says Priscilla. “It is also important that voter education is done so voters know what to expect on election day at their voting district.”

Granville is responsible for ensuring all activities as legally published on the elections timetable are done strictly to deadline. He also coordinates election preparations nationally. “For a local government election this is challenging and complicated in that close to 5 000 different ballot papers have to be printed,” he says. “For this election there were around 70 000 candidates nominated and 205 different political parties contested.”

Granville’s office move to the national results centre (which is his responsibility to manage) the week before the elections.

“We literally drive around with toiletries and clean clothes as you never know when you will get home,” says Priscilla. “We left the house on the morning of election day and only managed to return again on the Saturday. There is really no time to sleep and the adrenaline keeps you awake. It just seems like one long – VERY long – day.”

What happens in between elections?

“Election preparation takes a long time. There is more or less two years between elections and thus the planning of the next election has to commence immediately after the previous one. There are also by-elections that we deal with (for filling councillor vacancies).

It seems obvious that you love South Africa

“Loving our country is something that comes naturally. It is very exciting to be part of building a new society and specifically to play such a crucial role in establishing and building a democracy, which is crucial to our success as a nation. Nation building should be everybody’s business. The fact that you can have this as an occupation is an added benefit.”

How do you manage working with your spouse AND running a family?

“Because we work for the same organisation, we have a better understanding of each other and of the challenges and demands that come with the job,” says Priscilla.

“Our support system is in Worcester and when we moved up here, we did not envisage how we would need that support system with our jobs being so demanding at times.

“At first it was difficult, but we have an agreement that, no matter what, we have to keep communication channels open.  If I do not answer my phone immediately, Granville will send me a text message and vice versa.

“Our kids have extra mural activities that requires careful planning. And so we have an activity calendar in our bedroom. Every Sunday we look at that calendar to see WHO will take responsibility for what during the coming week. If it is my turn to pick up the kids from school and I’m running late, I will communicate with Granville immediately or make alternative arrangements. We have also built up a new support system here and I am thankful for these angels.

“When we get home from work, Granville cooks, I check homework and while I am busy helping Toni (11), Granville will run a bath for the two younger ones.

“Toni sometimes have classes until late. Granville makes dinner and I do the driving around.

“But Granville also sits in meetings and travel a lot. We have an excellent understanding and even more excellent communication channels to ensure that we do not miss out on the children’s schedules and our own.”

And then you also have time to study!?

“I started studying in 2010 and have had two graduations since then. I will be continuing in 2017.

So there’s a lesson in all this?

“We are each other’s ‘keepers’,” says Priscilla. “It is important for us to have each other’s support, otherwise we will not be able to accomplish anything.

“We work hard to ensure that we have a happy home. Many people would say it is too much, but we love each other and our kids and we live happily every day because we make it work. We stand by our favourite Bible verse, Philippians 4:13: ‘We can do all things through Christ who gives us strength.’ And Christ has never let us down.

On a more personal note

Priscilla and Granville met through the IEC around 1999. Granville moved to Worcester in 2007 and the couple married in 2008 at Merwida. They are an extended family of seven: Granville, Priscilla, four daughters and a son. Robin (24) lives on her own, Jesse (14) lives with his mother, and Toni (11), Alex (5) and Ilya (4) live with Granville and Priscilla.

Both Priscilla and Granville were actively involved in Worcester’s Calvary AMÉ Church before they moved to Gauteng. They lived in Worcester West but spent most of their time in Hex Park. They also had regular dealings with Valley FM. “What we miss most is the valley’s picturesque surroundings. When we drive down to the Cape – home – the best feeling is getting to the vineyards of the Hex Valley from Touws River.”